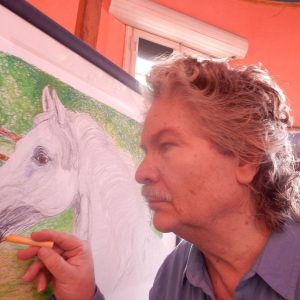 Born in Wroclaw / Breslau, Poland, he studied medicine at the University of Lodz. He specialized in Otorhinolaryngology in Gdansk / Danzig, Poland, and Hanover, Germany. He worked in Poland, Germany, Switzerland. He wrote, published and illustrated his Fables, Aphorisms and Tales. He lives in Switzerland.

«There is a child inside us who not only shivers, as Cebes Theban believed, who first discovered him in himself, but still tears and his own jubilation. When our age is nevertheless tender, he confuses his voice with ours, and of the two children who romp and contend with each other, and, together always, fear hope enjoy they cry, only one heartbeat, one scream and one yelp . But then we grow up, and he remains small; we kindle a new desire in our eyes, and he keeps his ancient serene wonder fixed upon them; we swell and rust our voices, and he still makes his ringing ringing like a doorbell heard. This secret tinkle we do not hear distinct in the youthful age perhaps as well as in the more mature, because in that busy arguing and pleading the cause of our life, the less we pay attention to that corner of the soul from which it resounds […].»   (from “Il fanciullino”, Giovanni Pascoli)

The esteemed author Marek Walis, capable of skillfully mastering several techniques and styles, refinedly able to represent different types of subjects, has the special gift of knowing how to generate an art that, managing to cross the boundaries between reality and fantasy, restores all human being the genuine ability to dream.

It is a question of seeing, grasping and cultivating that magical, genuine and unique something that both Pascoli theorized in the poetics of the Child, as Antoine de Saint-Exupéry used to weave his Little Prince. It is that “something” that children have inherent and natural, which for a strange reason gets lost as adults: knowing how to observe and wait with trepidation for Christmas Eve, stop in San Lorenzo with the nose up to find a shooting star and express the most impossible desires, run at breakneck speed on a meadow flying a kite, dip your feet in a stream, build a house on a tree, touch the sand and ears of corn with your fingers.

Marek Walis draws and paints with the golden texture of dreams, children and fairy tales. Yes, because the fairy tales from the Grimm brothers to Calvino, from Aesop to Collodi, contain a special, fantastic and magical element, able to enchant the reader and writer, like Marek’s works in those who create and those who observe.

So, whether it is the representation of a child, an animal, a self-portrait, real or fantastic, it does not matter, because what matters is to open the door of dreams, as happens in the work Edo asleep.

Manage Cookie Consent
To provide the best experiences, we use technologies such as cookies to store and / or access device information. Consent to these technologies will allow us to process data such as browsing behavior or unique IDs on this site. Not consenting or withdrawing consent may adversely affect some features and functions.
Manage options Manage third parties Manage vendors Read more about these purposes
View preferences
{title} {title} {title}